Deeper Into Community, Further Out in Faith

Erwin Rommel was a genius, no doubt about it. The problem was that he put his efforts to use working for the Nazi regime. And yet, despite his evil intent, we can learn something from Rommel to be put to use for God’s mission in the world. And in our church.

Rommel earned the nickname “Desert Fox” as he led the elite formation known as the Panzer Division across the ocean-like sands of North Africa. In so doing, he surprised allied forces with tactics of superior speed and maneuverability by mobilizing hundreds of tanks to travel together toward one specific goal.

While Rommel could plot a distant destination on the map and see continual progress toward that goal, his soldiers driving tanks had no concept of the headway they had achieved on a given day. In order to give his troops a continual recognition of their forward movement, he innovated. Rommel had a lead jeep drive in front of the tanks, placing in their path 55 gallon drums with giant flags waving above them. That way, every tank driver could see a short-range, objective marker, thus feeling progress during their long journey.

One author explains, “In this case the leader created a way for his troops to have visceral sense of movement with every rotation of the Caterpillar tank tread.”

As leaders of Good Shepherd, I, our staff, and Session, have a responsibility to lead this church family across our own desert of “Inviting all people to grow into a Christ-centered life in God’s family.” That’s a big mission!

Like treads on tanks in hundreds of miles of desert, our weeks can go round and round - an “undifferentiated landscape of one Sunday after another.”

By 2030, we want to transform Good Shepherd from a house of God to a home in Christ for thousands, by seeking out and leading others into the family of God, that together, we might grow up into Him who is the head of the church. We want our church campus to become a missionary outpost that exhibits a foretaste of heaven, brimming with all generations and every ethnicity!

To achieve that almost unfathomable goal, we’re starting with one particular milestone, one 55 gallon drum and flag in the sand upon which we can focus our attention. This one-year goal is both qualitative and quantitative. It’s simple to remember but profound to experience. We want to go “Deeper into Community and Further Out in Faith.”

In this first year of that 13-year goal, we want every member of the Good Shepherd family to commit to a Life Group (a Bible Study, Small Group, or Covenant Circle), so that we can be equipped to follow Jesus wherever he leads us in faith. We don’t just want to experience sitting in rows on Sunday morning, but sitting in circles during the week – enjoying rich, Christian fellowship where we can know and be known. We want every member of our family to have 2am friends (you know, those friends you wouldn’t hesitate to call at 2am!).

That’s the 55 gallon drum and flag the Jeep has set in the sand: “Deeper into Community, Further Out in Faith.” 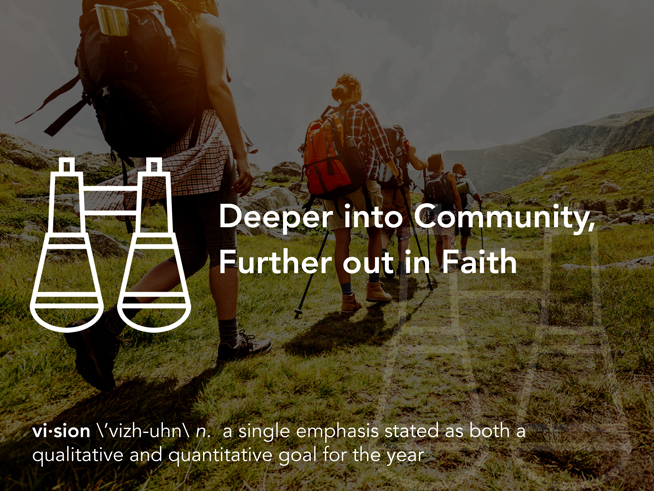 A Day at CBS

Even Better Than Bounce Houses!?

Next Door As It Is In Heaven

An Amazing Thing Happened on the Way to Jerusalem

A Motor Car for the Multitude

Who Is This Man?

Peace Be With You!

We Should Build a Confession Booth

Cast Upon a Horrible, Desolate Island

Deeper Into Community, Further Out in Faith

One Body, Many Parts

The Parable of the Sower

If We Stop to Think About it for Two Minutes...

They Will Know Us By Our... Happiness!?

From Your Pastor's Inbox

The Season of Lent

Firing At the Wrong Target

He Took Them With Him and They Withdrew

The Rearview and the Windshield

The War on Christmas (Is In Our Hearts)

A Dangerous Thing to Do

What Happened to Thanksgiving!?

As If I Were A Lobster

A Pumpkin in a Jar

Forget What is Behind and Strain Toward What is Ahead

Thursday Night at the Greek

Let the Little Children Come To Me...

Pokémon Go and the Christian Life

Going Viral... In Such a Time as This

"It Takes All Kinds"

Then Jesus Told Them This Parable...

ECO National Gathering, This Sunday, and Beyond!

An Invitation to Year-End Giving

The Greatest Gift (and Mary's Response!)

The Greatest Gift (and Our Response)

What's Your Bag of Dimes?

This Fall at Good Shepherd

Introducing a New Member of our Staff Team

Two Horses are Better than One (Or are They?)

The Discipline of Celebration

Where There Is No Vision, People Perish

What Do You Enjoy about The Open Table?

Did You Increase Your Pledge!?

VBS Performance: One Night Only!

An Update from Jessica Knutzen

Off the Shelf | Date Your Wife

Women of Faith "One Day" Event

The Weekly | Sunday, May 6th

Give Online: A Member's E-mail

Christ in the Passover

Top 10 Reasons You Need to Go to the Women's Retreat

An Update from Jessica

The Danger of the Christian Bubble

In the Hands of the Potter

The Letter to the Hebrews

An Update from Matt & Michelle

When the Messiah Arrives

The Open Table Is A Hit!

Keep Up With Rachel!

All Church Camp Out

Fall Dance for Those With Special Needs